Rolf Oberholzer, goes out on his e-bike every week 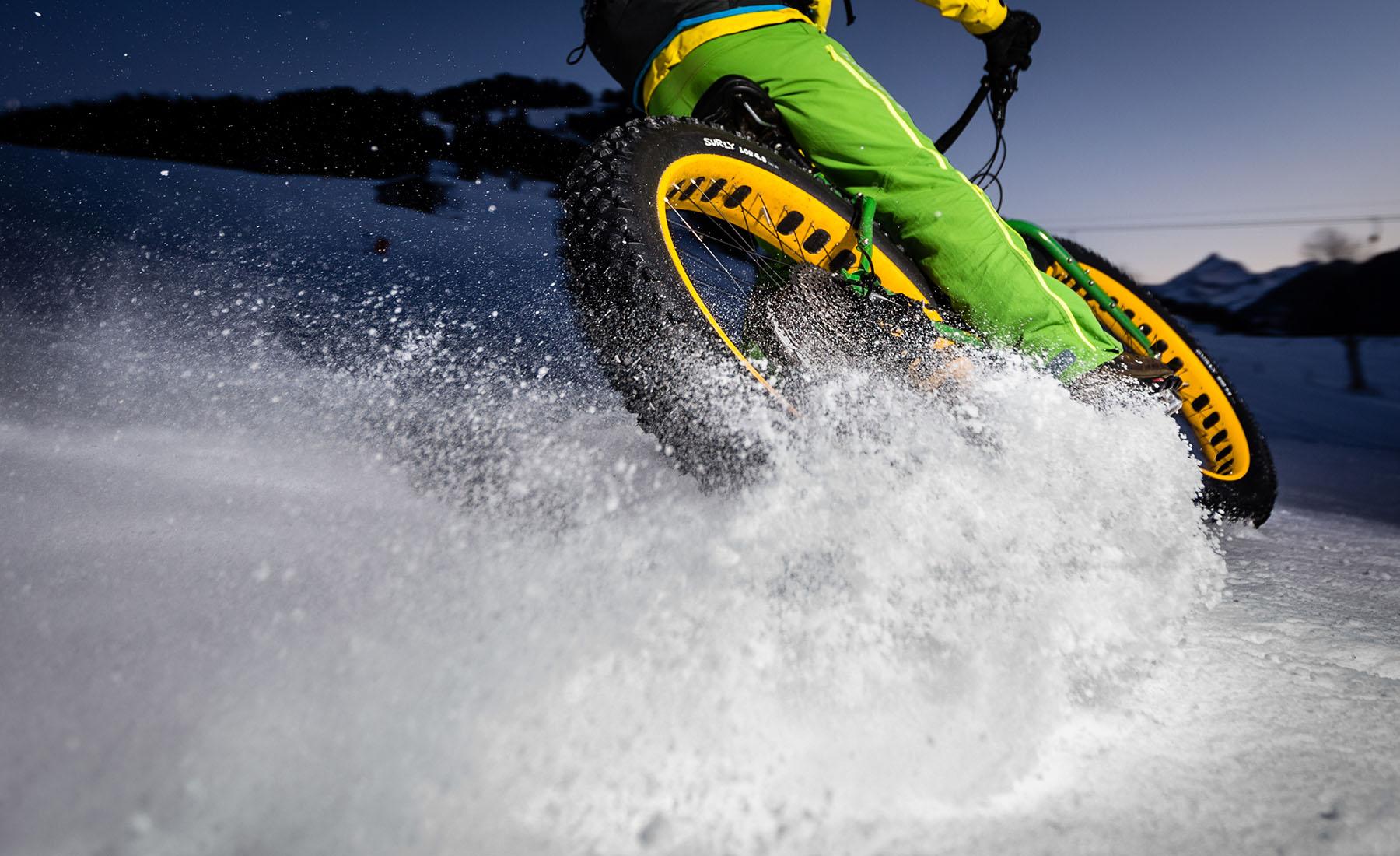 Snow, ice and sand. The natural enemies of many bikers. A trend from the US is defying these conditions: Fat Biking. Tires up to 4.8 inches in width and with air pressures at around 0.5 bar are the essential ingredients. And recently also electric drives. We went for a ride with Rolf Oberholzer, who put the maxon BIKEDRIVE through its paces at the Snow Bike Festival 2016 in Gstaad and in the Engadin.

Rolf, this is not the first time you have ridden a Fat Bike. What did it feel like to ride with a motor in the rear wheel?

Rolf Oberholzer: It's like greased lightning! In hilly terrain, you can get the rear wheel to drift even going uphill, in boost mode. That was a lot of fun on the slopes at the Snow Bike Festival in Gstaad.

It was also really cool last weekend in the Engadin. There are lots of perfectly prepared winter hiking trails there, and we had about a foot of new snow every night.

Where else does it make more sense to have an electric motor than in a Fat Bike? The wide tires provide fantastic traction, and the motor keeps you speeding along, whatever the surface. And by the way: Riding an e-bike doesn't necessarily mean that you pedal less hard. ;-)

Where do you see the advantages of a rear hub motor over a mid-mounted motor?

Rolf Oberholzer: The bike is much better balanced. Bikes with mid-mounted motors are often front-heavy, which is a major disadvantage in snow. I even managed to do a wheelie at the first go. The drive train is under less stress than with a mid-mounted motor – a strong argument in light of today's prices for 1x11 cassettes.

To me, the maxon BIKEDRIVE also looks great. I don't particularly like the blocks around the bottom bracket on mid-mounted motors.

The hub system offers weight advantages. In this regard, I think it's great how maxon has solved the issue of securing the hub. Quick-release levers (or a quick-release axle) let you remove and install the unit without tools. This makes it easy to fix a flat tire – just like with a normal bike. 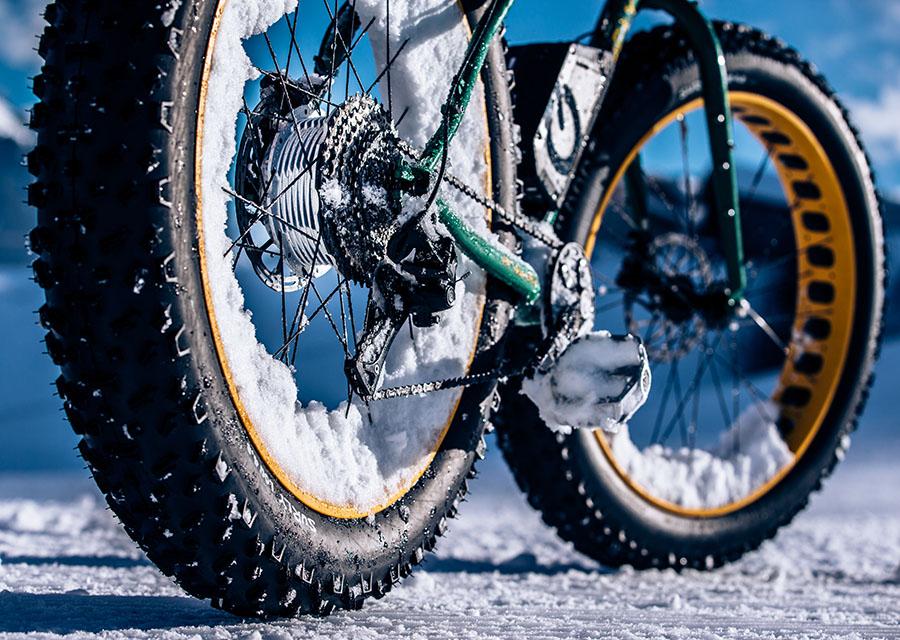 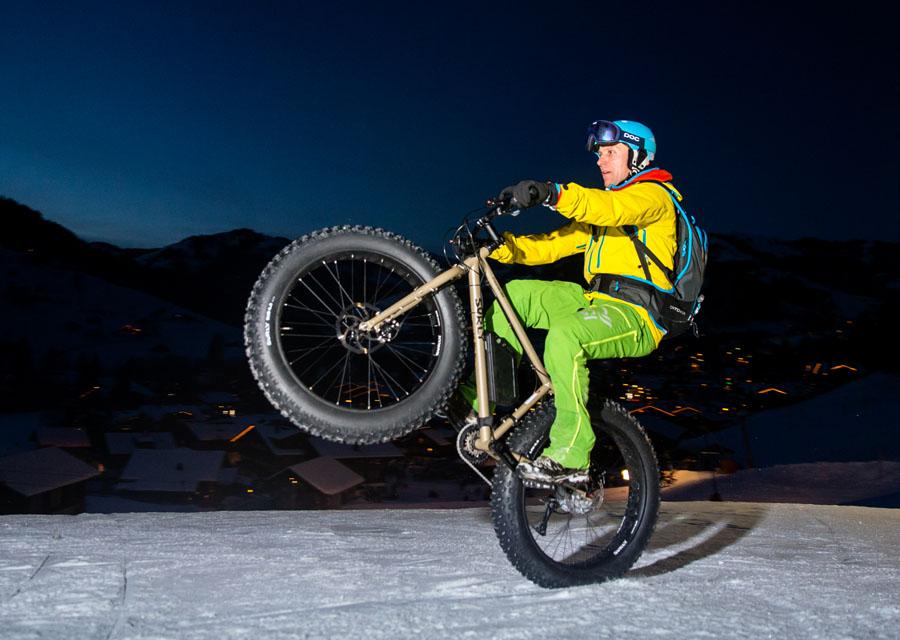 For which applications would you recommend an e-fat bike? And who should buy one?

Rolf Oberholzer: Those are difficult questions. I really love riding up into the mountains under my own power. In winter, I also do a lot of skiing. I mainly use an e-bike for getting to work. So at the moment I wouldn't consider getting a Fat Bike.

People who are looking for a fun winter hobby should definitely give it a try. Especially if you have prepared winter hiking trails nearby. Riding up and down ski slopes is also a lot of fun.

Batteries usually don't like cold temperatures. Were you satisfied with the battery of the maxon BIKEDRIVE? How much elevation gain were you able to do?

Rolf Oberholzer: We spent six days on a camping site in the Engadin. The bikes were chained up outside the whole time and a lot of snow fell every night, with temperatures around -10 °C. At night, we kept the batteries in the car in the warm, and they were charged there as well. The Fat Bikes worked really well in general. At least the electric motors did. We had problems with the gearshift here and there.

Of course, you can't compare the battery performance with the performance at higher temperatures. For example: In the Engadin, we went on a trip from Samaden via the Stazersee into the Val Roseg and back. A distance of 27 km with an elevation gain of 580 meters in the snow – on our Fat Bikes, which are not exactly light. As we didn't want to get soaked in sweat in the cold, we used the motors quite generously. We got more than I expected out of the 360 watt-hours of the maxon Bikedrive battery.

What should people consider when shopping for an e-Fat Bike?

Rolf Oberholzer: To install a maxon BIKEDRIVE, the Fat Bike should have a 135 mm offset frame, like the Surly Pugsley or the Moonlander. Whether you get 4.8-inch tires or slightly slimmer ones is a matter of taste in my opinion. The same goes for the material of the frame.

And finally: What are your tips for riding on snow?

Rolf Oberholzer: No more than 0.5 bar tire pressure. Your saddle should be slightly lower than you're used to (with an e-Fat Bike). And don't forget your ski suit, helmet, and goggles.

Another important point: Always go full throttle! It's softer to fall on snow...

More about the hub motor