Freeride through the maxon campus 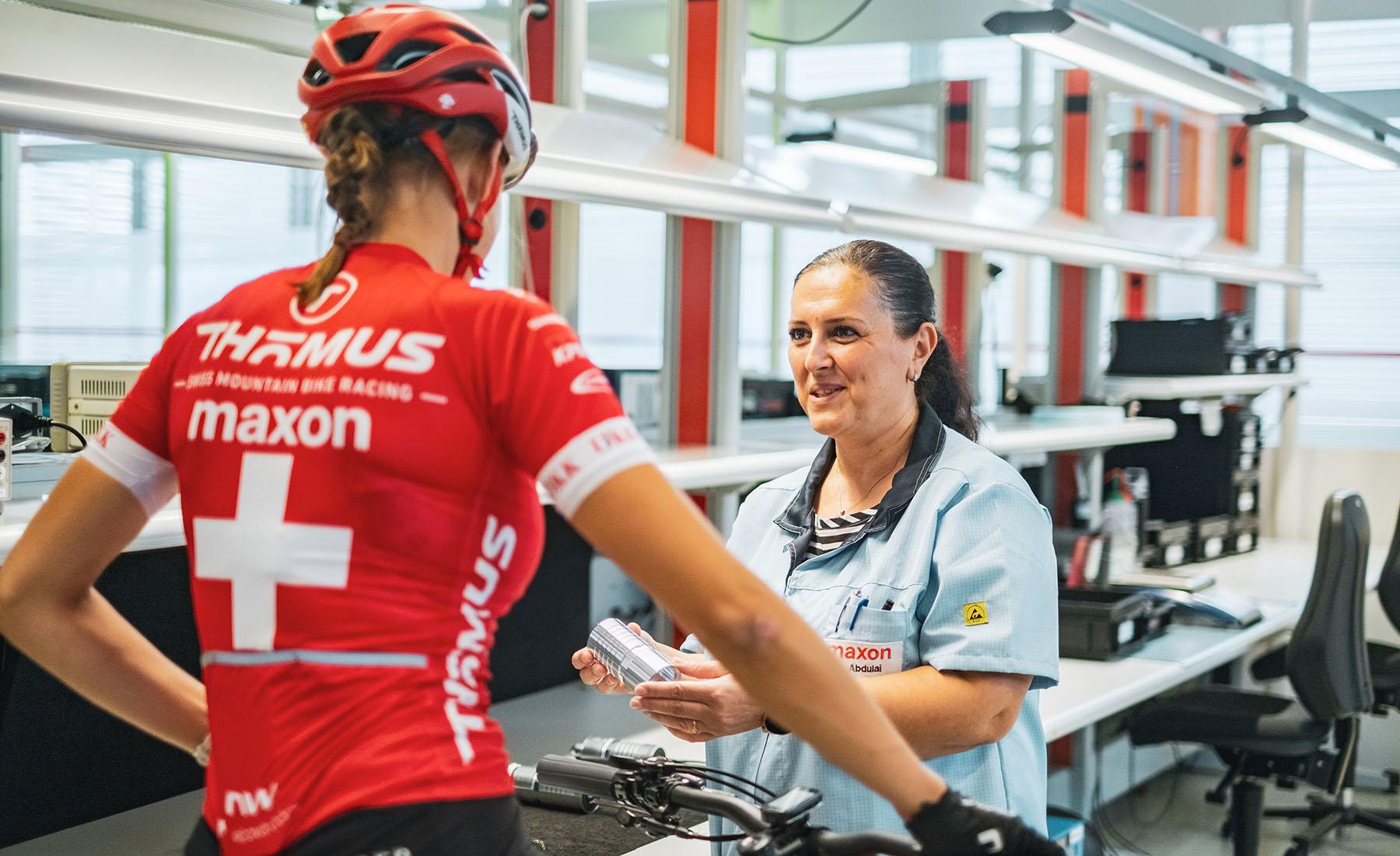 There are many people behind the development of the innovative BIKEDRIVE AIR drive for e-bikes at maxon. Professional mountain biker Alessandra Keller got to meet some of them and hear their stories on a special freeride through the Sachseln campus.

Alessandra Keller loves a challenge. The professional mountain biker, who rides for the Thömus maxon team, has no idea what’s in store for her today. It’s a demanding route with plenty of obstacles, a course full of pitfalls. A trail with varying levels of difficulty, undulations, small jumps as well as balance and trial elements. It will require every ounce of her skill. She’ll also be challenged by big height differences, narrow office corridors, and people on the route. But Keller won’t have to worry about any of these things, because this unique ride around the maxon campus in Sachseln is a victory lap rather than a competition. It’s an opportunity to engage with like-minded individuals. maxon has been supporting the Swiss professional cycling team since 2021, and most of its employees are on the same wavelength as Keller. “They’re all cyclists!” the 26-year-old remarks in amazement, adding: “It’s really cool to see that the people here also share my passion for cycling. When you realize that an entire company is behind the project, it gives you an enormous boost.” And what a boost it is. Keller is riding a very special e-bike. The Lightrider E Ultimate is the world’s first full-suspension cross-country electric mountain bike weighing less than 15 kilograms, made possible thanks to the innovative maxon BIKEDRIVE AIR drive. So, what lies behind it? Alessandra is eager to find out. After inspecting the route, she nods her head: “Perfect!” The superwoman from Central Switzerland puts on her gloves and helmet, clicks her shoes into the pedals, and off she goes. After a few meters, she turns right off Brünigstrasse, going cross-country past the maxon company sign and over the first grassy hill onto the campus. She immediately picks up speed. A short wave at reception, a rapid descent, then across the courtyard and a small bridge into the elevator of Technology Center V. Her destination: the fourth floor. In the hallway she signs a bicycle helmet for Roger Villiger, Head of Business Unit Aerospace, who is himself a passionate cyclist. The next section is narrow and winding. It would be safe to say that this is probably the first time anyone has ever been here on a mountain bike. Keller makes her way through the open-plan office...

Keller arrives at the desk of Severin Portmann. The 37-year-old is a technical buyer for all parts of the e-bike drive. He knows all about bikes. Every year, he covers around 8,000 kilometers and 100,000 meters of altitude in his free time on his mountain bike or racing bike. The two hit it off immediately. Portmann is an important facilitator at the interface between development and production. Given the current delivery and logistics bottlenecks, having the right components in the right quality and quantity at the right place is a puzzle with many unknown parts. “At the end of the day, it’s down to us if development takes longer,” says Portmann. More than 100 parts are required for the BIKEDRIVE AIR drive, around twice as many as for most other projects. On top of that there’s the procurement of batteries. “We’re learning so much,” says Portmann. In his job he needs a good instinct when it comes to finding the right supplier along with his own expertise. Only those who understand the developers’ specifications can speak to potential partners on an equal footing. The diversity in development at maxon and his training as a polymechanic help him, as do his many years of experience in operational purchasing and material planning. “You should know how a gearhead works if you’re looking for suppliers for the required parts,” explains the keen cyclist. 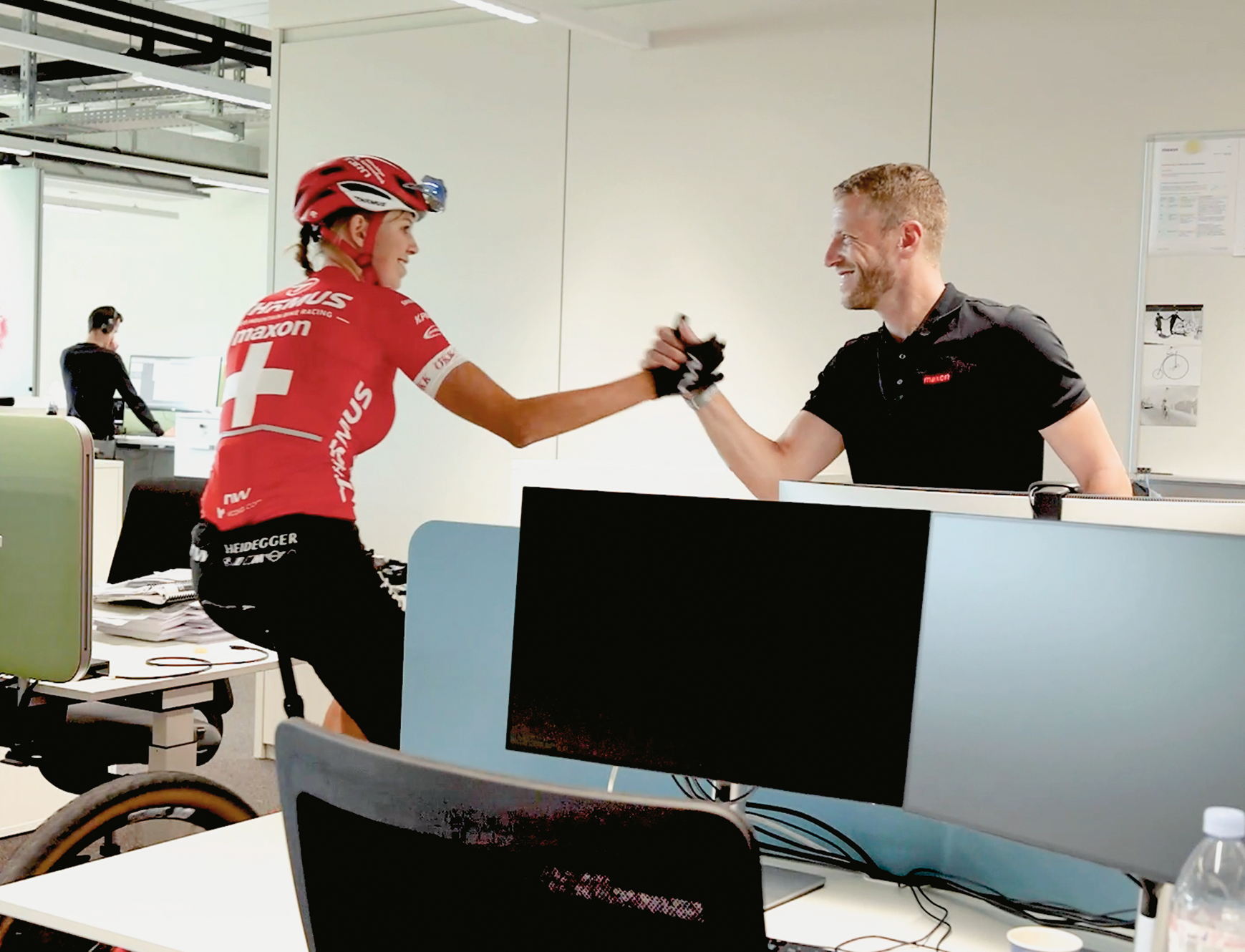 She nods. She knows from experience that it’s the little things that make the difference when it comes to success. One such factor in her sport is the weight of the bike. The mountain bike she uses in competitions weighs 11.5 kilograms. At 14.9 kilograms, the e-bike she uses to go full tilt through the factory is slightly heavier. “Weight isn’t a big factor in this case. The e-bike has the same tires and the same frame construction. Maneuvers with an e-bike are often much less agile. But that’s not the case here,” says Keller. It’s more important to her that the bike has a lowerable seat post, as this makes it easier to overcome technical obstacles. “I can get into it easier and am ultimately faster,” she explains. Even today, seated in a low position, she takes the last turn in the production area with a lot of momentum and only brakes when she reaches the workbench.

Waiting for her in production is Gjillijmsere Abdula. The Special Production employee is one of the few people at maxon who doesn’t ride a bike in her free time. Gjillijmsere Abdula is known to everyone as “Cele”. She is the expert when it comes to the special challenges in production. She assembles the BIKEDRIVE AIR motor by hand. It takes a good hour to produce one drive. She has carefully lined up the individual components for Keller to see. There are many small steps that have to be carried out with great precision. The expert is particularly good at this, not least because she is constantly learning new work techniques and standards. First, she puts the drive shaft on the stator plate and glues it. Next come the magnets for the rotor, followed by the ball bearing, which is pressed onto the shaft. After casting the stator, she inserts the rotor into the stator. Then she solders the motor’s PCB and assembles the gearhead. “We get this without lubrication. After I’ve pressed it onto the ball bearing, I apply five grams of lubricant,” explains Abdula. The gearhead is then connected to the motor. Done. Keller holds the drive component in her hand, clearly amazed: “Wow!” Abdula adds: “The most difficult part is the casting of the stator and the gluing process. But it’s working great.” The result is impressive. Keller smiles, points to her e-bike drive, and gives a thumbs-up: “Absolutely!” 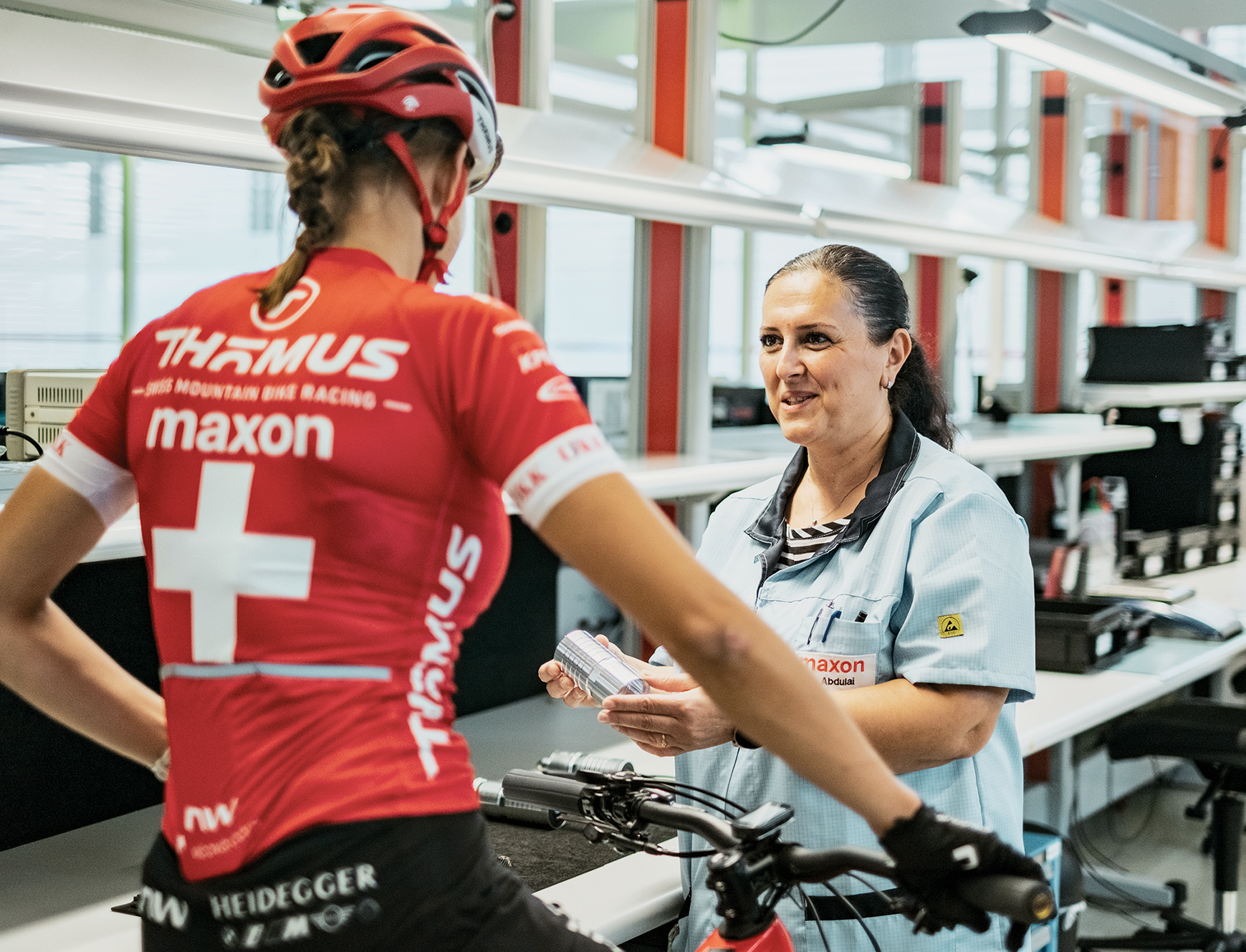 After just a few meters, Keller is convinced: “This e-bike is great to ride. I used it in training. It’s perfect for fun bike tours to improve basic fitness.” Of course, Keller can’t use technical assistance in training and competitions, but she appreciates the chance to ride the innovative e-bike whenever she can. On trail sections where even she would have to dismount, the maximum support and torque of up to 40 newton-meters mean that she can easily climb further up. She turns into the test laboratory and stops at the development department.

Erich Lerch also played a large part in BIKEDRIVE AIR. The development project manager has been with maxon for six and a half years, but has around 40 years of experience and boundless enthusiasm for all things electric. It’s not for nothing that he experiments with high voltage in his free time and likes to conduct electrostatic experiments using a Wimshurst generator. Anyone who can handle up to 500,000 volts will know exactly how to get the most out of a battery capacity of 250 watt-hours for the e-bike drive. Lerch and his team had to overcome many obstacles on the journey to develop a new motor and gearhead. “We were able to draw on our expertise, but we also found ourselves in uncharted territory. We had to develop and fine-tune a sensor system that absorbs the pedal force and precisely controls the motor. It needed to deliver just enough power so that riders would perceive it as natural support,” says Lerch. A kind of harmonious tailwind at the push of a button. Keller is able to reassure him. “When the support kicks in, you react very sensitively as a rider. But with this drive it feels perfect,” she says. Erich Lerch smiles. A lot of time was spent working on this sensation with the software developers. The well-measured support when pressure is applied to the pedal – a little less at the dead center of the pedaling movement and a little more on the other pedal – means that the lightest e-mountain bike is also exceptionally clever. The motor is undergoing endurance testing in the background. “The toughest test of all, however, is real operation,” says the 63-year-old. Behind the scenes there was another challenge to overcome. Rules and regulations made it necessary for maxon to guarantee the functional safety of the entire drive system. This involved a lot of laws, standards, and certificates. “We must above all document that the e-bike motor is safe,” emphasizes Lerch. “That’s an awful lot of documentation and evidence that needs to be prepared in parallel with the actual development work.” 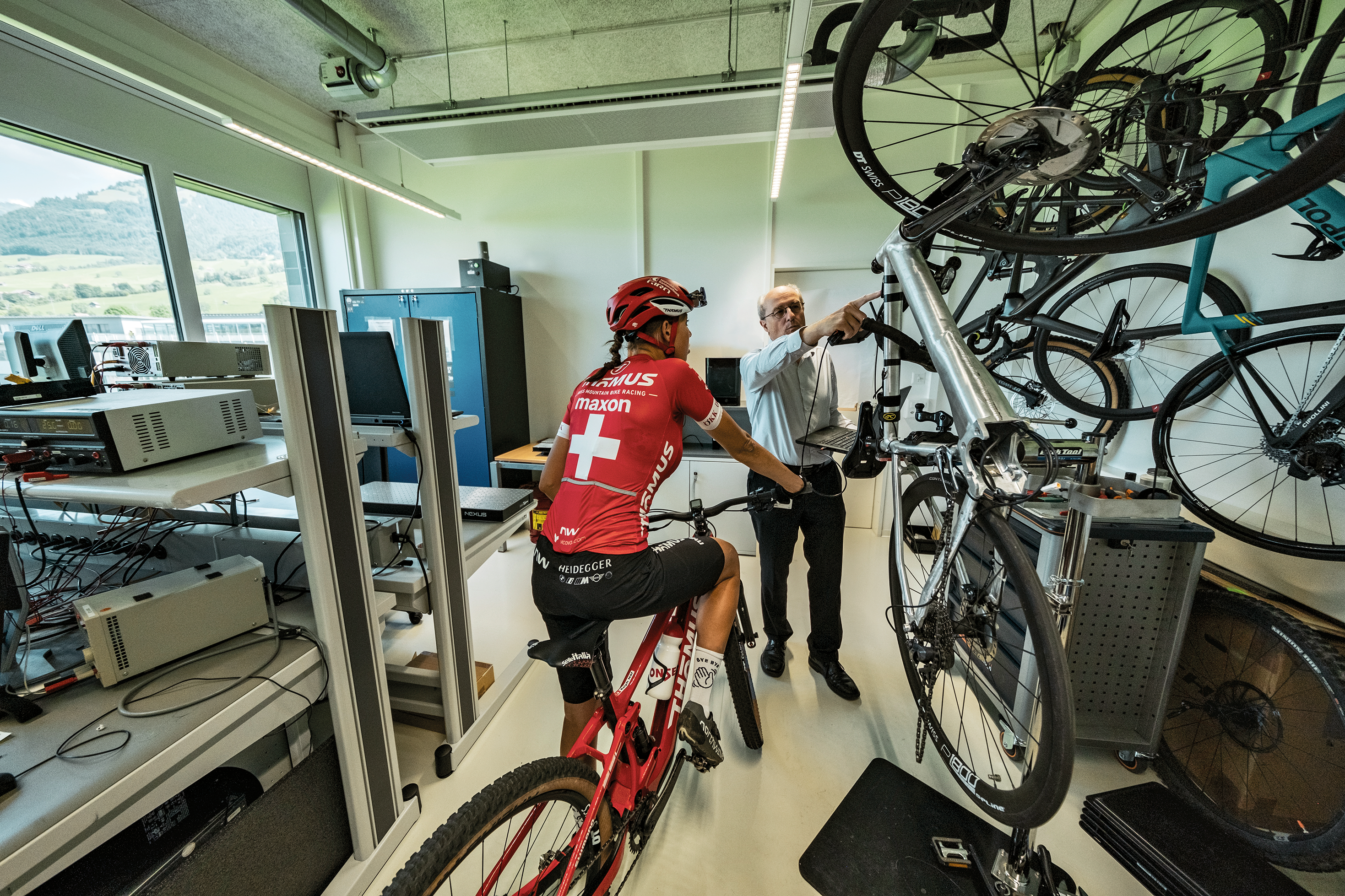 Alessandra Keller has been unstoppable this year. The 26-year-old mountain biker made her international breakthrough and secured a double overall World Cup victory, with a win in the cross-country category in Snowshoe, USA, despite a fall, and a short track win in Vallnord, Andorra. Shortly thereafter she topped the overall rankings in Val di Sole, Italy, again in cross-country and short track. At the World Championships, the professional cyclist from the Swiss Thömus maxon Swiss Mountain Bike Racing Team won silver in the short track category. A knee injury had thrown her off course two years earlier, causing her to miss out on her big goal of competing in the Olympics in Tokyo in 2021. Keller, whose first successes were the Junior World Championship title in 2013 and the U23 World title in 2018, studied pharmacy and lives in the canton of Nidwalden. 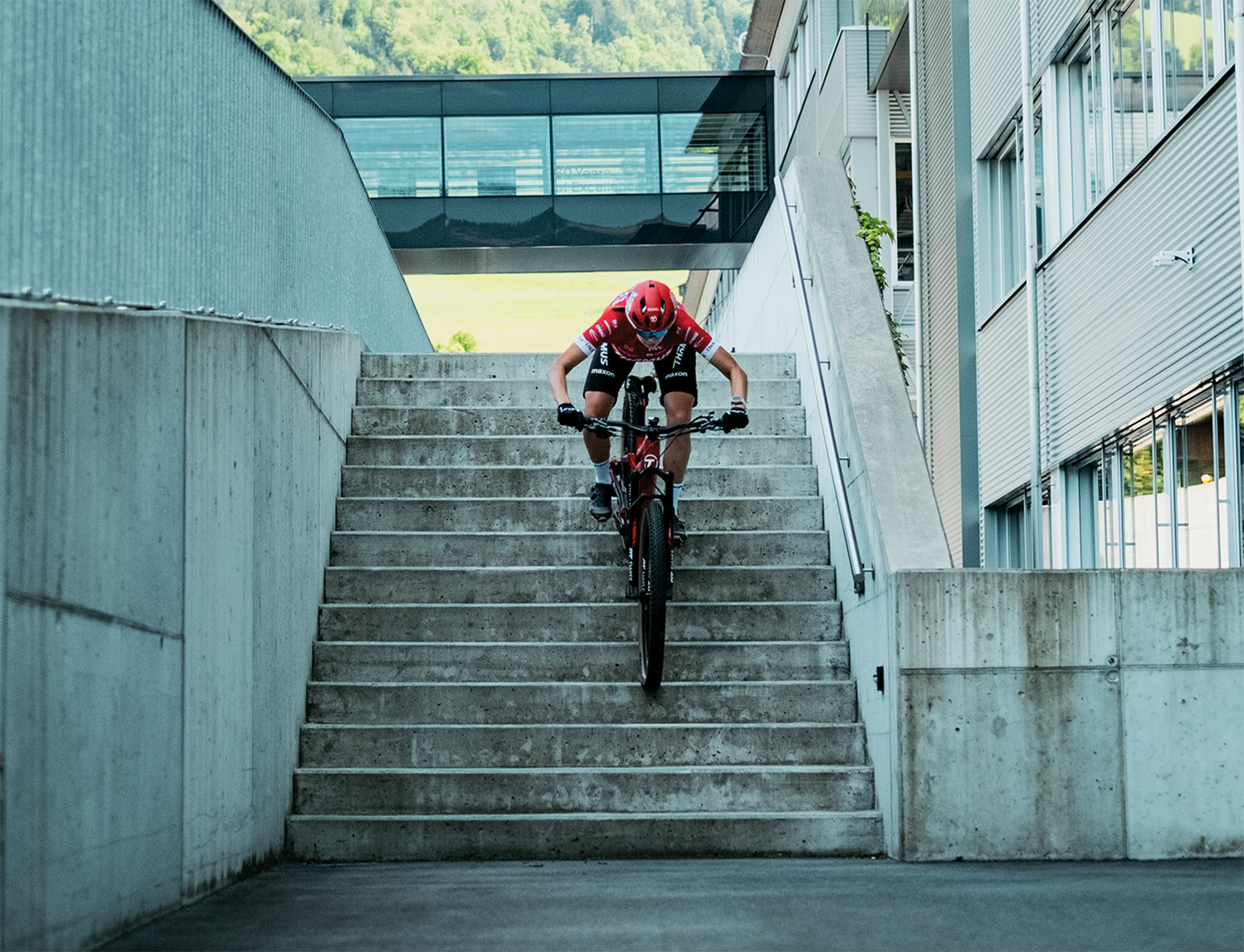 When it comes to safety, the drive must not suddenly start and push the bike forward while the cyclist is waiting at a red traffic light, for example. There are no red lights to stop Keller’s progress – either on the mountain bike trails she rides or on her route through the factory. As soon as the elevator door opens, she pedals hard. The tour is over. Keller is quickly out of sight, but she leaves behind her passion for the sport of mountain biking. For the maxon employees who were delighted to welcome this special guest, one thing is certain: Alessandra Keller is one of us.

Read the driven magazine Behind the scenes video 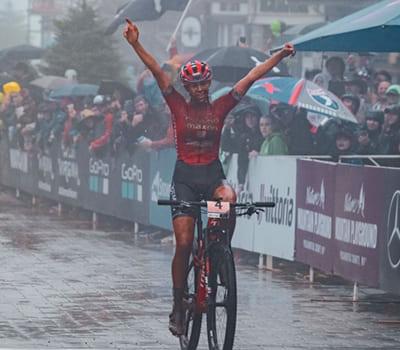 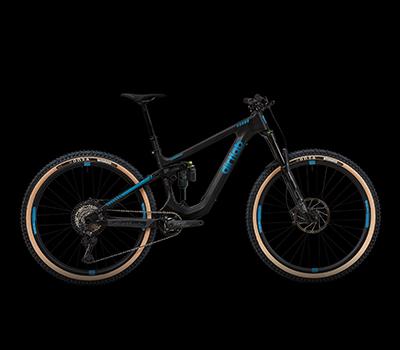 Deliberate reduction to the essential. How modern technologies fuel the trend of light e-bikes.